One of the most prevalent and potentially dangerous sleep disorders is obstructive sleep apnea. You might know that this means your breathing periodically stops during sleep. But did you know that your breathing can stop 15 to 30 or more times per hour while you sleep? And each episode may last 10-30 seconds or more.

Sleep apnea causes a significant dip in the level of oxygen in your blood and strains your cardiovascular system. It results in daytime sleepiness, fatigue, and difficulty concentrating. Ignoring the problem does you no favors, either. Undiagnosed or untreated sleep apnea can lead to serious complications like glaucoma, high blood pressure, diabetes, heart attack, and even cancer.

What Is Obstructive Sleep Apnea?

Obstructive sleep apnea occurs when your airway becomes partially or completely blocked for some reason. This may occur when the muscles at the back of the throat relax and fail to keep the airway open.

Tissue in the area may also temporarily block the flow of air to the lungs. People with a small upper airway, large tongue, large tonsils, nasal polyps, or a deviated septum are particularly susceptible to obstructive sleep apnea.

Obstructive sleep apnea occurs in people of all ages – children as well as adults – and in men and women, although men appear to be at a greater risk for the sleep disorder. However, sleep apnea can be challenging to diagnose in children. That’s because symptoms of pediatric sleep apnea are less noticeable than when the disorder appears in adults.

Another type of disorder, called central sleep apnea, is much less common and occurs due to a problem with a person’s central nervous system, which controls involuntary respiration.

How to Tell if You Have Sleep Apnea

The only way to accurately diagnose sleep apnea is with sleep testing, which can be done in the convenience of your own home or in a fully accredited sleep lab, like at the Sleep Center at Georgetown ENT. As a board-certified ENT specialist who is also board certified in sleep medicine, Dr. Scott W. Franklin can help rule out blockages in the nose or throat that may be causing your symptoms.

How often your breathing is interrupted per hour can identify the severity of your condition:

Signs and symptoms that may indicate sleep apnea include:

If you suspect you have sleep apnea, your first step should be to consult an ENT doctor who specializes in sleep medicine. This way, any nose or throat obstructions that may be causing or contributing to your symptoms can be properly addressed. In Georgetown, Texas, Dr. Scott W. Franklin is that physician. He is board certified in sleep medicine as well as in the surgical treatment of ear, nose, and throat disorders, making him uniquely qualified to treat patients suffering from obstructive sleep apnea.

If you have sleep apnea, Dr. Franklin will likely recommend certain lifestyle changes such as avoiding alcohol, quitting smoking, and losing weight if you are overweight, since they can all worsen obstructive sleep apnea.

Certain surgical and nonsurgical options may resolve your sleep apnea problems once and for all. Which procedure is appropriate for you will depend on the cause of your condition and intensity of your symptoms. At the Sleep Center at Georgetown ENT, we offer a variety of in-office and outpatient surgical procedures to treat obstructive sleep apnea.

Shrinking excess tissue from the tongue and throat is a painless method of alleviating snoring as well as mild to moderate obstructive sleep apnea symptoms.

This procedure uses radiofrequency ablation (RFA) to reduce the volume of tissue at the base of the tongue to prevent it from falling backwards and obstructing the airway during sleep. Excess tissue of the soft palate or throat may also be targeted for shrinkage by RFA.

It works by delivering low-frequency radio waves to painlessly and precisely remove excess tissue without harming surrounding tissue. Only local anesthesia is required, so this in-office procedure is quick and convenient and offers fewer risks than surgery. Repeat procedures may be necessary to obtain the desired results.

The tissue that hangs down from the roof of your mouth, at the back of your throat, is called the uvula. It helps push food toward the opening of your throat. It can vibrate during sleep and worsen snoring.

If the uvula is swollen, which may occur due to allergies or infections, it can block your windpipe and cause obstructive sleep apnea. A uvulopalatopharyngoplasty – or UPPP, for short – surgically removes the uvula. The procedure is sometimes combined with a tonsillectomy or adenoidectomy.

Dr. Franklin may recommend nasal surgery, depending on the cause of your obstructive sleep apnea. For example, a deviated septum may require straightening or nasal polyps may need to be removed to restore air flow through the nose.

If large adenoids or large tonsils are causing or worsening your or your child’s sleep apnea symptoms, Dr. Franklin may recommend a tonsillectomy and/or adenoidectomy to remove the obstructing tissue.

This surgery enlarges the area at the back of the throat by surgically moving the upper and lower jaw forward. This procedure is called maxillomandibular advancement.

In particularly severe cases, you may require a tracheostomy. This surgery successfully treats obstructive sleep apnea by creating an opening in the trachea of your neck, which allows airflow to bypass the upper throat. The opening is typically uncovered at night, allowing you to breathe without obstruction while you sleep.

Make sure you’re able to breathe properly while asleep. Sleep apnea is a dangerous condition that requires treatment. Left undiagnosed or untreated, you risk serious medical complications like cardiovascular disease. Visit the board-certified ENT physician who is also a sleep medicine expert at the Sleep Center at Georgetown ENT. Call (512) 869-0604 to schedule an appointment with Dr. Scott Franklin in Georgetown, Texas, or request an appointment now. 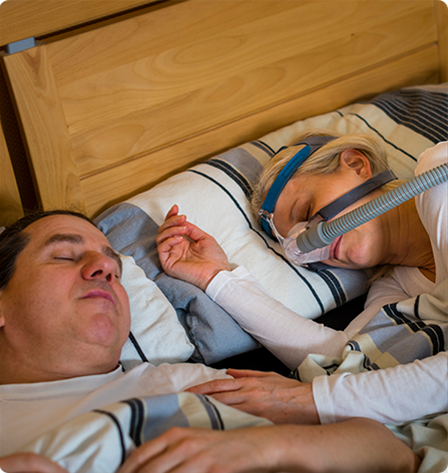