Ear infection is more than just nasty bouts of pressure and pain. Recurring ear infections are a common cause of ruptured eardrums and may also lead to long-term, permanent damage to your ear as well as hearing loss.

When ear infections keep coming back, it’s generally the result of an infection of the middle ear (otitis media), the area behind the eardrum. This occurs when bacteria or a virus, perhaps due to a respiratory infection, spreads to the ear via the eustachian tube. Enlarged adenoids can also block eustachian tubes and increase the risk of an ear infection.

If the eustachian tube becomes significantly inflamed or blocked, fluid buildup can cause symptoms such as ear pressure and pain, hearing impairment, and fever. In small children who may not be able to properly describe their symptoms, you may notice tugging on the ears, nausea or vomiting, and a loss of balance.

Chronic middle ear infections are especially common in children. In fact, most kids experience the condition by the age of 3. This is because of the size and position of a child’s eustachian tubes.

These tubes are meant to help drain fluid from the ears, but in children, whose bodies are still growing, the tubes are short, narrow, and closer to being horizontal – all of which increase the likelihood that a child will develop an ear infection after a cold or the flu.

Chronic middle ear infections may also occur in adults who have some form of eustachian tube dysfunction.

At Georgetown ENT, ear, nose, and throat surgeon Dr. Scott W. Franklin diagnose and treats recurring ear infections in both children and adults every day, as well as acute ear infections such as swimmer’s ear – also called an outer ear infection (otitis externa). Treatment for a swimmer’s ear will depend on the cause and usually consists of cleaning and draining the outer ear canal as well as administering prescription eardrops to clear the infection.

Common treatments for chronic middle ear infections include the insertion of ear tubes and balloon dilation of the eustachian tubes.

If your child is experiencing more than one or two ear infections a year, Dr. Franklin may recommend ear tube surgery, which has long been the gold standard for treating chronic ear infections in children.

During this procedure, also called a tympanostomy tube insertion, a tiny tube is surgically inserted into the eardrum to relieve pressure and aid fluid drainage from the middle ear. The tube remains in place for a period of time – usually for a year or longer – then falls out on its own.

Ear tube surgery is one of the most common surgeries performed on children, although it may also be used to treat adults with chronic ear infections. In addition, the procedure may be recommended to fix structural malformations of the eardrum or eustachian tube or to repair air pressure injuries that occur due to altitude changes or scuba diving.

Occasionally, adenoids may be removed at the same time as an ear tube surgery, depending on a patient’s condition and symptoms. Research indicates that having both procedures (ear tube placement and adenoidectomy) can significantly reduce the need for repeat ear tube surgery.

The eustachian tubes that connect the middle ear to the back of the nose are typically closed until you chew, swallow, or yawn. If you try to “pop” your ears with a yawn, for example, the popping sensation is the opening of the eustachian tubes.

If you are regularly unable to pop your own ears when clogged, or if conservative treatment methods like medication don’t relieve your chronic ear infection symptoms, you might want to ask Dr. Franklin about balloon dilation of the eustachian tubes.

Also sometimes called a balloon eustachian tuboplasty, this simple and safe procedure can be performed on children as well as adults.

In this minimally invasive procedure, a balloon catheter is inserted through the nostrils into the eustachian tube and inflated to gently dilate the tube, which relieves eardrum pressure and allows fluid to drain from the ear.

The balloon is then deflated and removed. No tissues are cut and nothing remains in the eustachian tube. For these reasons, many patients who experience recurring middle ear infections are beginning to prefer balloon dilation to the more traditional ear tube surgery.

Do you or your child have frequent ear infections? You might be a candidate for balloon dilation or ear tube surgery. Not only will you avoid the pain and pressure of recurring middle ear infections, but you can help prevent complications like a ruptured eardrum or hearing loss. 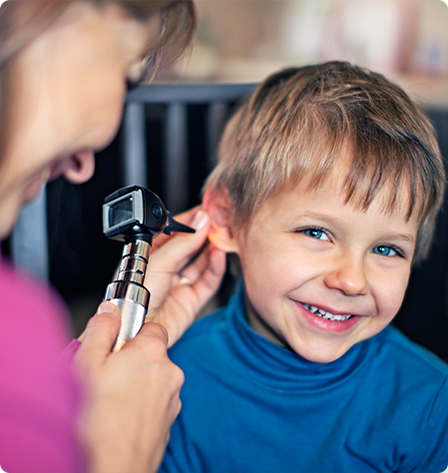