There are many reasons your nose may bleed. Children appear to be particularly susceptible to nosebleeds. But so, too, are adults. The location of the nose – protruding from the middle of the face as it does – makes it an easy target for injury. And because the blood vessels in the nose are close to the surface of the skin, those vessels can bleed easily.

A minor nosebleed here or there is usually not serious. But frequent or recurring nosebleeds may indicate a problem that requires medical attention.

The two most common reasons adults or children get nosebleeds are nasal dryness and trauma to the nose.

Recurrent irritation to nasal tissue can also cause nosebleeds. This includes a lot of sneezing or nose-blowing – for example, during a cold, sinus infection, or allergic reaction, or from a chronic runny nose or ongoing exposure to chemical irritants.

Nasal dryness is often caused by breathing in dry air. This occurs when you live in a dry, desert-like climate, at a high altitude, or during the winter months when you spend a lot of time in heated homes, offices, or vehicles.

When nasal tissue becomes too dry, it can form a crust, which may easily crack and bleed when touched.

Nasal dryness may also occur for other reasons. Structural issues like a deviated septum can dry out nasal tissue, causing recurring nosebleeds. Also, certain medications can make your nasal tissue more likely to bleed. These include blood-thinning drugs such as anti-inflammatories, as well as overuse of cold and allergy medications like antihistamines and decongestants.

Trauma to the Nose

Nosebleeds are common when there is an injury to the nose, whether from a direct blow during sports, a car accident, a fall, a fight, or other reasons. In these cases, it is important to seek timely medical attention because the blood may indicate a condition requiring emergency care such as internal bleeding or a break within the nose, face, or elsewhere on the skull.

Children can injure the nose and trigger a nosebleed when they insert objects into their nostrils. Nose-picking, especially with long fingernails, can also cause a nosebleed.

When to See a Doctor About Nosebleeds

Infrequent, minor nosebleeds can usually be managed at home by simply applying pressure (in this case, pinching both nostrils shut) for 5 minutes or so.

But more serious nosebleeds may require medical attention. In general, you should see an ENT doctor like Scott W. Franklin, MD, about a nosebleed in the following circumstances:

Do you have other symptoms in addition to recurring nosebleeds? Take our survey to find out if you may benefit from sinus surgery.

Nosebleeds, while scary, are rarely life-threatening. However, if you have concerns about a nosebleed, or if you or your child experience recurring nosebleeds, make an appointment with Dr. Franklin at Georgetown ENT. He will evaluate you to determine if there is an underlying issue that requires treatment. Call our Georgetown, Texas office at (512) 869-0604 or request an appointment now. 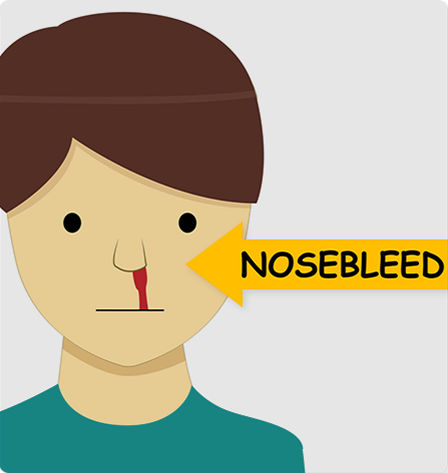